In Brighton I met architect Robin Hillier from Architype, an architecture firm that has developed and updated the Segal method to exceed current construction standards. Hillier was the architect for the Hedgehog Co-op self-build for rent scheme in Brighton which was initiated in 1996 by four people in housing need, some of whom were travellers who felt they had little hope of being housed by Brighton Council, so looked into the options for self-build. Because they lacked funds they approached the council through contacts in the Diggers self-build scheme, a similar project also in Brighton that used the Segal method. They spent two years building up the group, publishing the initiative and lobbying local councillors and were eventually given a sloping site to develop overlooking a valley and towards the sea at the edge of one of Brighton’s housing estates. South London Family Housing Association took the project on board, working with the local council, meaning that the families didn’t have to offer any financial investment, only sweat equity. 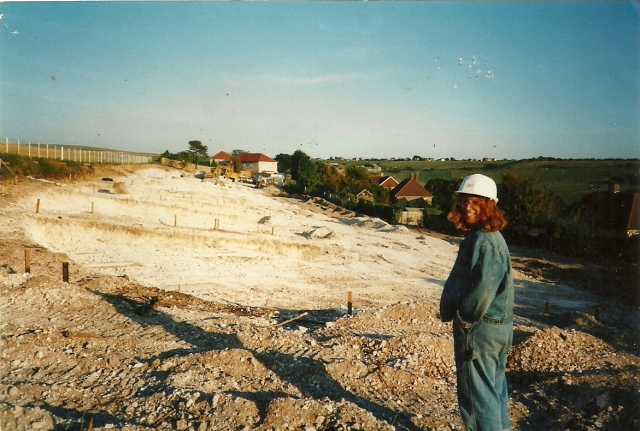 The site before the build (Image: Deborah Seacombe)

This scheme was different to the previous Segal houses I saw. Here the design is akin to a modern ranch crossed with the semi-informality of a British seaside shack. Even the post and beam structures of this project aren’t fixed into the ground but rest sturdily on concrete pads. Each of the ten houses have been designed to enjoy the natural advantages of the site, with generous windows and verandas and whilst each house is the same size and has the same appearance from the front (in order to comply with planning regulations), the interiors and layouts are bespoke: some have two bedrooms, others three.

Robin introduced me to Debbie, one of the self-builders, and I was able to get some first hand insight into the process of physically and socially building this co-op. Debbie was a single mother living in a bedsit in south London when she got the opportunity to be involved in the Hedgehog scheme. She explained the process of collaborative building (as opposed to the individualised process in Lewisham), where the group worked together to build all ten houses.

Each family had to put in 30 hours of work per week. Whilst this was more difficult for the single parent families, the community helped each other out when circumstances made it difficult for people to achieve these hours. To make things easier they created a crèche on site and took turns to run this. The participants undertook a mere two days of training to learn the basic ‘farmhouse joinery’ needed to build in the Segal method. As in the Lewisham project some of the more highly skilled jobs, like plumbing and electrical services, were contracted out. Untrained and working things out as they went along, the co-op took two and a half years to build, and I got the impression from Debbie that this was a painful process towards the end. Yet Debbie mentioned that they learnt as they practiced – through a communal approach to building learning was triggered, as in Ingold’s belief in ‘thinking through making’ where learning as understanding in practice: “it is wrong to think of learning as the transmission of a ready-made body of information, prior to its application in particular contexts of practice. One the contrary, we learn by doing, in the course of carrying out the tasks of life” (Ingold, 2013:13).

The role of the architect and the site manager were particularly important. A site manager/trainer who had knowledge of the Segal method was appointed to work on the site for two and a half days every week. The site manager was also a trainer, so again the importance here was on capacity building. Debbie spoke about the personality of the manager who kept the morale up in the group, and helped to build the confidence and the self-esteem of the participants. Debbie did however mention that the build would have been easier and faster if he had been on site five days a week, yet this wasn’t possible due to budget constraints.

What was particularly interesting was the group’s initial focus on the ‘groundworks’ of the project, before the physical build began. Much time was spent working out a governance structure which included writing a clear mission statement, aims and objectives, a decision making process (in this case by consensus), the development of rules, collective values and mechanisms of conflict resolution. The group tried to address everything at the beginning so the group knew what their boundaries were. The community split into groups for childcare, finance, development and human resources, and in order to make sure that all possible issues were considered, each group quizzed each other, meaning that all members of the project started off on the same page. Debbie stressed that the participatory process and the techniques used within this should be able to reconcile opposing points of view and yet still arrive at a consensus, and the relative small scale of this project made consensus workable and manageable. Establishing the groundworks of the project in Newcastle in order to reconcile a physical build with the very important task of a social build is something that is vital to do at the start. An initial focus on aims and values was also something that I witnessed in Bathore where the project preparation phase included an interactive process of confidence building between the groups involved in order to foster understanding about the nature of participation and the roles of each group. These ‘rounds of negotiation’ were vital to ensure that the groups understood the importance of a democratic and fully participatory process.

Three of the completed houses

The connection between the project and the existing community of the area was also interesting in the Hedgehog scheme. Debbie spoke of protests against the project from local residents, which she felt stemmed from prejudices about people coming from London and the fact that they were unfamiliar with this type of project. This point is particularly interesting in light of my research in Bathore where it was the community themselves that protested in order to stay on the land. So there is an interesting relationship between a politically engaged community fighting for their precarious community and the UK context of NIMBYism.

In Bathore establishing an organisational structure for the project that partnered the local authority with the community was absolutely essential for the success of the project, therefore this initial phase was vital in laying the groundwork for the relationships and the collaborations that were to build over the coming years. Fostering these cross-group relationships, both between participants and the wider stakeholders at the beginning will also be an important aspect of the Newcastle project. One of the main issues within the Hedgehog project came from the wider structures that they had to work within. Although the project was regulated by the housing association and the participants had weekly targets to meet the housing association were never really ‘on board’ with the project. The housing association felt that there was an inherent weakness within this model – one of the unpredictability of production through the self-build process which obviously effected the cost effectiveness of the project. Post-build there continues to be issues between residents and the housing association; the housing association not being used to managing a co-operative housing model like this. As such there has been a lack of any cross-group learning process that works across scales of governance. Reflecting upon the wider structural conditions of projects relying on the input (financial, organisational or technical) of outside agencies is important in self-build projects. The pushing and pulling of many different stakeholders with potentially different agendas and the uneven power dimensions borne from this can become a hindrance. 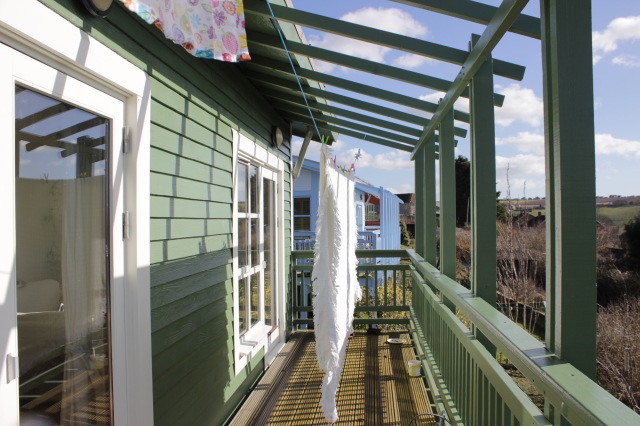 One question I get asked when talking about this model of self build for social rent is why an individual would want to spend two and half years of their life building their own home when they won’t even own it at the end. Choice in housing for social rent and the capacity building focus on training and employment opportunities was evidently important in the Hedgehog project, however there are also economic perks for the resident. In the 1970s José Ospina, with the Housing Corporation, developed a new legal and financial model for self-build for rent. This model allowed for persons without any existing capital to participate in self-build projects where they would hold an equity share while renting at an affordable rent. So because of their physical input into the scheme in the form of sweat equity the self-builders were given a 30% discount on the association’s standard rent for similar housing and they are given the possibility of a capital payment should they leave their homes. The tenancies are transferable to one named person meaning that they can leave their homes to their children. As such no families have left the project after 15 years. This astonishing fact questions the concept of ‘ownership’, whether this is something that is economically and legally defined or something psychologically much deeper.