I visited Walter’s Way in Lewisham and met Ian White, a resident there, who was able to give me some good insight into the self-build programme set up by Lewisham council in the 1970s. These projects were first initiated by Walter Segal, Colin Ward and Nicholas Taylor, who secured several council-owned sites for shared (council and tenant) ownership. The project was designed not only to meet housing need but the initiators of the project believed that self-build could help close the usual divide between the designer, consumer, contractor and worker.

Until this time there was no record of a local authority directly supporting self-build schemes, previously it had only been a fringe activity taken on board by some building societies (Ospina, 1987: 49). Lewisham had available land but on unsuitable sites, too hilly for conventional forms of building. In the 1960s the architect Walter Segal had developed a simple form of wooden frame construction suitable for hilly sites, because the houses were lightweight being of timber post and beam construction and were lifted off the ground on stilts. It was also a perfect model for self-build, being very simple and quick to construct. Lewisham Council saw the value in this approach for some of their more difficult sites and developed a scheme in which local council tenants would be given the opportunity of constructing and ultimately owning their own homes through the provision of a council mortgage. Residents would also be given a discount for the labour provided. 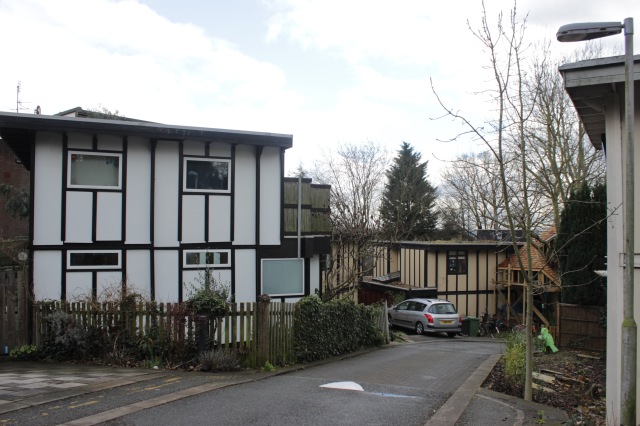 From 1977 thirteen houses were constructed on Walter’s Way, forming part of the earliest low-cost self-build housing project in the country. Built on a heavily sloping site snaking down the hill it resembles a micro-community in the heart of Lewisham. The dwellings are recognisably different from the other houses surrounding them sitting at odd angles to each other, yet are still sensitive to their surroundings being sliced between trees and greenery, each with a south facing garden. The original wooden construction methods are evident, the facades being constructed from concrete panels and wooden batons, yet some people have extended their homes, adding glass facades or deconstructing the exterior panel walls and covering with more modern and ecological forms of insulation. Regardless of these alterations, this is, as quoted by Taylor (in Ospina, 1987: 51) “vernacular in the true sense, of ordinary people building with ordinary people’s skills”, not the high-design headiness of Grand Designs, or a nostalgic hark back to a pastoral dream, or even a nod to a Garden Cities aesthetic. This is inherently a living and diverse urbanscape which is seamlessly integrated within the working city; a visual remnant of a state structure which attempted to enable local people through self-build and is still a reflection of “Lewisham’s libertarian vision of socialism which [was] neither the managerial Right nor the authoritarian Left, but which uses state intervention to release the creative energies of ordinary people” (Taylor, in Ospina, 1987: 51). This vision is a key aim of the Newcastle project – to create architecture that enables and integrates people within a working city.

I also saw this push against the formalist, rationalist state in Bathore, Albania, through Co-PLAN’s participatory planning process which aimed to shift the role of the local authority from direct providers of urban services and infrastructures to ‘enablers’, managing to blur the roles of the producer and the consumer, which was one of the aims of the Lewisham schemes. Consequently, as in Bathore, a process of cost and benefit sharing between the community and the municipality occurred. 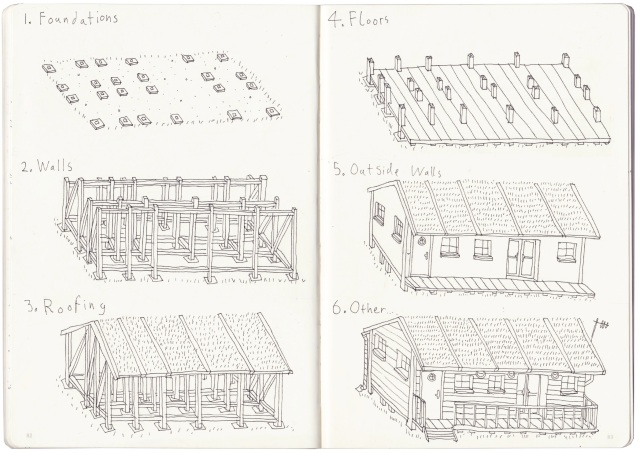 The process of building a Segal house

Although each house in Walter’s Way was built to the same specifications, these were easily adaptable to the diverse needs and expectations of each family. Flexibility of use and ease of construction is at the heart of the Segal system, which is reflected in the design. The frame is on a dimensional grid, making plans easy to follow, and all construction is done using dry jointing techniques with bolts and screws, so there are no wet trades involved that might require more enhanced training. This square grid is almost a reflection of the ‘core house’ that I saw in Albania, where a simple structure is erected which is then ‘in-filled’ over time. But instead of the use of a concrete frame, the Segal model uses wood. The use of a core structure means that the walls and partitions are not load bearing so the ‘in fill’ can be done incrementally over time. In the Segal method this infill is completed using modular panel walls held in place by wooden batons that can easily be unscrewed and moved around to change room formations. This also means that ‘in wall’ services such as electrics and plumbing can be easily accessed and repairs and alterations simply made. Segal made use of standard ‘off the shelf’ material sizes – each 8 foot in length so less cutting and waste is involved making the process more economical and also saves the time and energy of the self-builder. With ceilings only 8 foot high perhaps the rooms should feel enclosed, but with the use of floor to ceiling windows, light streams into the rooms and opens the interior spaces up. 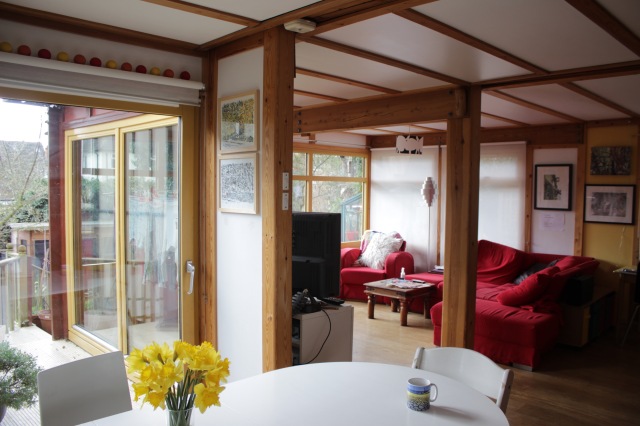 The interior of a house on Walter’s Way

In Walter’s Way the self-builders were given 19 variants on this simple modular form to choose from with a range of add-on modifications (Ospina, 1987: 52-3). Each family was given basic typewritten specifications, describing the sequence of construction and basic freehand drawn plans and sections to follow. They went to evening classes to learn essential woodwork skills and once the build started they worked within their nuclear families, building at their own speed and obtaining materials and advice from the architect or the council as needed. Although this wasn’t a collaborative, community build, families learned from each other and helped each other when needed. Ospina (1987) calls this a ‘libertarian model’ of self-build, or ‘building together apart’, which offers freedom for each family to go at their own speed, labour being individualised, apart from the infrastructure works which were contracted out. Regardless of this individualised approach, a strong community developed, each family going through a similar process, learning as they went along.

The modular approach also means that people can be creative in what and how they use the wall panels. Ian has replaced some of the original wooden panels in his home with coloured plastic ones, using the materials that he had around him. This is almost the ‘bricolage’ approach – a certain material improvisation – that I saw in Albania, which is able to add individualism and a certain quirkiness to an otherwise standardised design. The ability and flexibility of the Segal method to cater easily for modifications over time, allows the process of building, of ‘making home’ to go beyond the point where the home is seen as ‘finished’. Here again is a connection between Segal’s method and what I witnessed in Bathore, where the process of building is constantly going on, modifications are always on the horizon as changing needs and wants occur. As Ingold (2013: 47) states, normally, “Residence begins when building ends, much as the use of an artefact follows from its making”. In the end “the building yields a building” (2013: 47). However, what the Segal system offers, like the system of building used in Bathore, is an environment in constant construction, signifying the urban as a process in which the ‘finished object’ is fleeting.